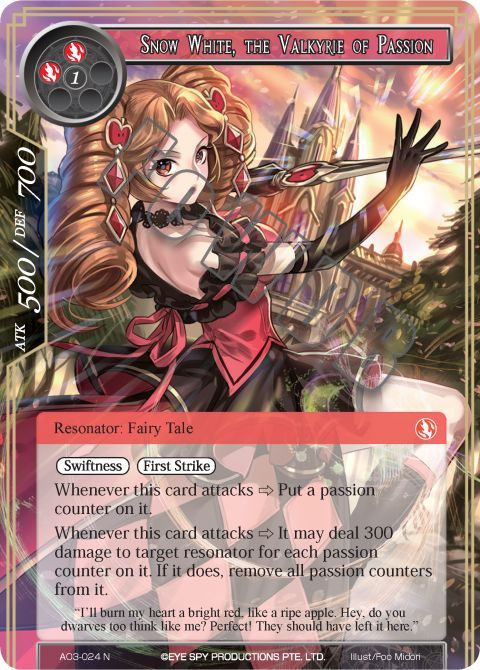 Fire
Text
Swiftness First StrikeWhenever this card attacks ⇒ Put a passion counter on it.Whenever this card attacks ⇒ It may deal 300 damage to target resonator for each passion counter on it. If it does, remove all passion counters from it.
Flavor Text
"I'll burn my heart a bright red, like a ripe apple. Hey do you dwarves too think like me? Perfect! They should have left it here."
Code
AO3-024N
Rarity
N - Normal
Artist Name
Foo Midori
Set
AO3 - Alice Origin III
Format
New Frontiers, Wanderer, Origin, Alice Origin Cluster
Next (AO3-025N)

Ex.: "Snow White, the Valkyrie of Passion" attacks while it has one passion counter, and its controller plays the second automatic ability, followed by the first automatic ability. If "Stoning to Death" is used before either ability resolves, this card's abilities will resolve and 300 damage will be dealt to the target.