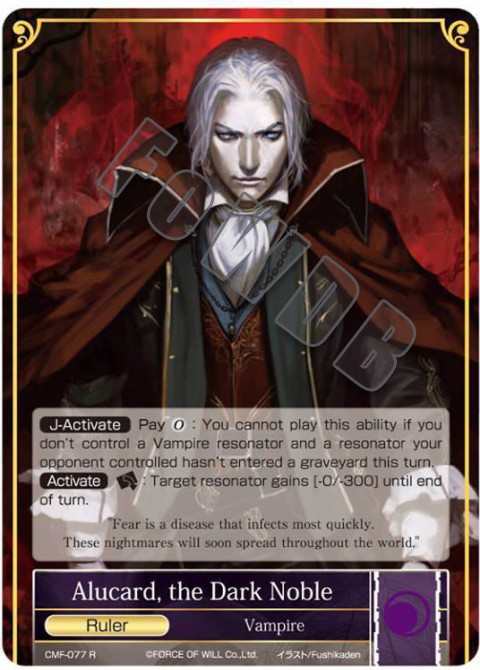 Darkness
Text
J-Activate Pay
0
: You cannot play this ability if you don't control a Vampire resonator and a resonator your opponent controlled hasn't entered a graveyard this turn.
Activate

"Alucard, the Dark Noble" requires a player to control a Vampire resonator and for their opponent to have a resonator enter a graveyard in the same turn in order to play its judgment process.

Dracula, the Demonic One CMF-077R 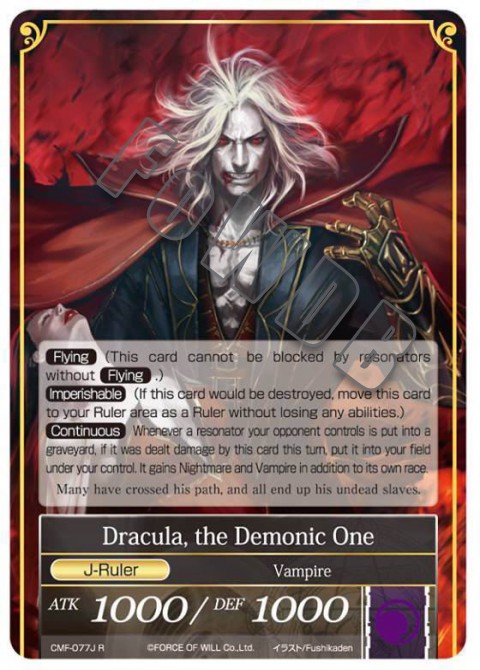 Darkness
Text
Flying (This card cannot be blocked by resonators without Flying.)
Imperishable (If this card would be destroyed, move this card to your Ruler area as a Ruler without losing any abilities.)
Continuous Whenever a resonator your opponent controls is put into a graveyard, if it was dealt damage by this card this turn, put it into your field under your control. It gains Nightmare and Vampire in addition to its own race.
Flavor Text
Many have crossed his path, and all end up his undead slaves.
Code
CMF-077R
Rarity
R - Rare
Artist Name
Fushikaden K.K
Set
CMF - The Crimson Moon Fairy Tale
Format
Wanderer, Origin, Grimm Cluster
Next (CMF-078R)