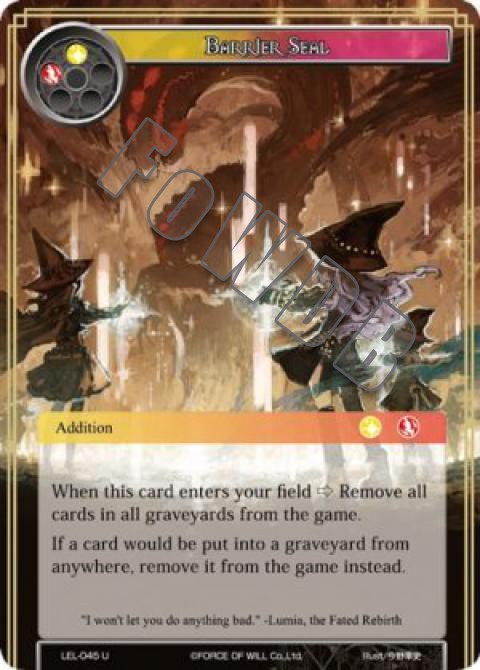 Fire
Text
When this card enters your field ⇒ Remove all cards in all graveyards from the game.If a card would be put into a graveyard from anywhere, remove it from the game instead.
Flavor Text
"I won't let you do anything bad." - Lumia, the Fated Rebirth
Code
LEL-045U
Rarity
U - Uncommon
Set
LEL - Legacy Lost
Format
Wanderer, Origin, Lapis Cluster
Next (LEL-046C)

If "Barrier Seal" is destroyed by a spell, it will be destroyed and put into a removed area before that spell would leave the chase. Thus, the spell will go to the graveyard as normal.

While "Barrier Seal" is applying its effect, abilities that trigger when a card is put into a graveyard do not trigger, as the cards are moved directly to the removed area from their original zone.

An ability that triggers "when this card is discarded" or a spell/ability with an additional cost of discarding a card will still work normally while "Barrier Seal" is applying.
Ex."Seth, the Arbiter" has an ability that triggers "when your opponent discards a card". This will trigger even if your opponent discards a card and it is put into a removed area because of "Blazing Seal". However, if "Charlotte's Protector" is put into a removed area when discarded by "Charlotte, Determined Girl", it will not trigger, because its trigger is "When this card is put into a graveyard from your hand", which it was not.