(As the game starts, if you are not player going first, you get a will coin with "Banish this coin: Produce

.")At the end of your turn ⇒ Remove target rested resonator you control from the game. Then put it into its owner's field.
Flavor Text
Fate is a cycle. When the world fell into crisis again, the girl stood defiant once more.
Code
LEL-071R
Rarity
R - Rare
Set
LEL - Legacy Lost
Format
Origin, Lapis Cluster
Banned
Wanderer 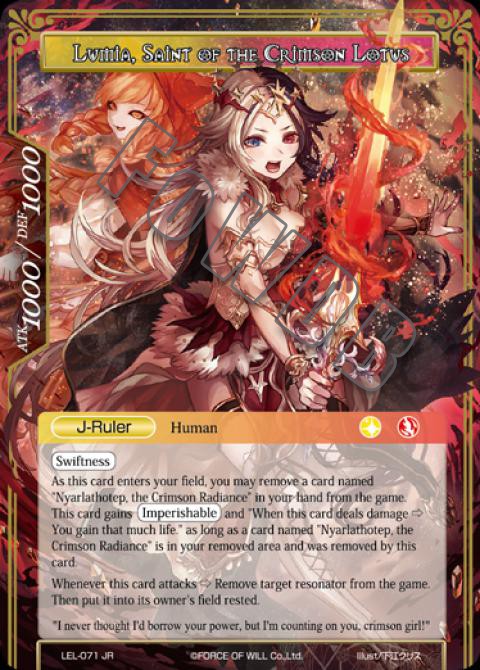 Fire
Text
Swiftness
As this card enters your field, you may remove a card named "Nyarlathotep, the Crimson Radiance" in your hand from the game.
This card gains Imperishable and "When this card deals damage ⇒ You gain that much life." as long as a card named "Nyarlathotep, the Crimson Radiance" is in your removed area and was removed by this card.Whenever this card attacks ⇒ Remove target resonator from the game. Then put it into its owner's field rested.
Flavor Text
"I never thought I'd borrow your power, but I'm counting on you, crimson girl!"
Code
LEL-071R
Rarity
R - Rare
Set
LEL - Legacy Lost
Format
Origin, Lapis Cluster
Banned
Wanderer
Next (LEL-072R)

If you remove "Nyarlathotep, the Crimson Radiance" from your hand as this card enters the field, it will continue to gain Imperishable and "When this card deals..." if it's destroyed and put into a ruler area. If this card is destroyed while it has Imperishable and you later play its judgment process again, it will continue to have the gained abilities, even if you don't remove another copy of Nyarlathotep.