Blazer, the Eater of Dimensions MPR-023SR 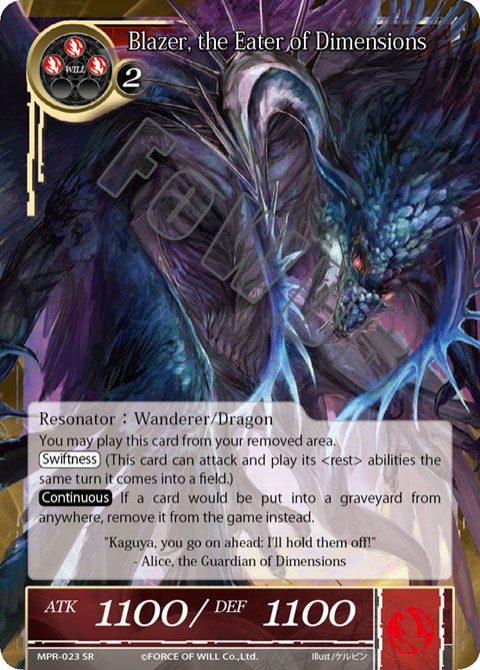 Fire
Text
You may play this card from the removed area.
Swiftness (this card can attack and play its <rest> abilities the same turn it comes into a field.)
Continuous If a card would be put into a graveyard from everywhere, remove it from the game instead.
Flavor Text
"Kaguya, you go ahead: I'll hold them off!" - Alice, the Guardian of Dimensions
Code
MPR-023SR
Rarity
SR - Super Rare
Set
MPR - The Moon Priestess Returns
Format
Wanderer, Origin, Grimm Cluster
Next (MPR-024C)

"Blazer, the Eater of Dimensions'" Continuous ability is a replacement effect. Cards that trigger "when ~ is put into a graveyard" will not trigger when they die if Blazer is on the field, because they never hit the graveyard.

If "Blazer, the Eater of Dimensions" would go to a graveyard from the field, its ability will see itself changing zones and remove it from the game instead. If it would go to the graveyard from anywhere else, including being cancelled, discarded, or milled, it will still be placed in its owner's graveyard.