: Target resonator with Flying you control gains [+200/+200] until end of turn.
Flavor Text
The ruler of Armalla, the flying city. The wingmen who live in Armalla, the heavenly garden, do not hesitate to sacrifice themselves in its defense. The angels, are summoned to fight thanks to the magic stones.
Code
SKL-001R
Rarity
R - Rare
Set
SKL - The Seven Kings of the Lands
Format
Wanderer, Origin, Alice Cluster

Arla, the Hegemon of the Sky SKL-001R 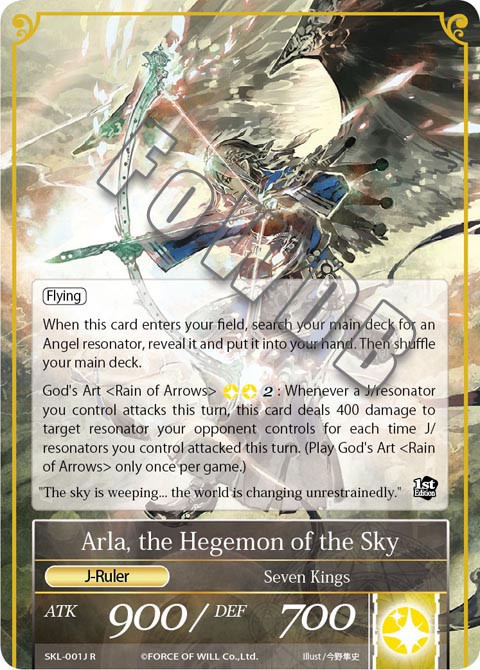 Light
Text
Flying
When this card enters your field, search your main deck for an Angel resonator, reveal it and put it into your hand. Then shuffle your main deck.God's Art <Rain of Arrows>

2
: Whenever a J/resonator you control attacks this turn, this card deals 400 damage to target resonator your opponent controls for each time J/resonators you control attacked this turn. (Play God's Art <Rain of Arrows> only once per game.)
Flavor Text
"The sky is weeping… the world is changing unrestrainedly."
Code
SKL-001R
Rarity
R - Rare
Set
SKL - The Seven Kings of the Lands
Format
Wanderer, Origin, Alice Cluster
Next (SKL-002R)

Arla's God's Art will still trigger even if Arla is no longer on the field. If this happens, Arla will still be the source of damage, whether as a Ruler or Astral Ruler.