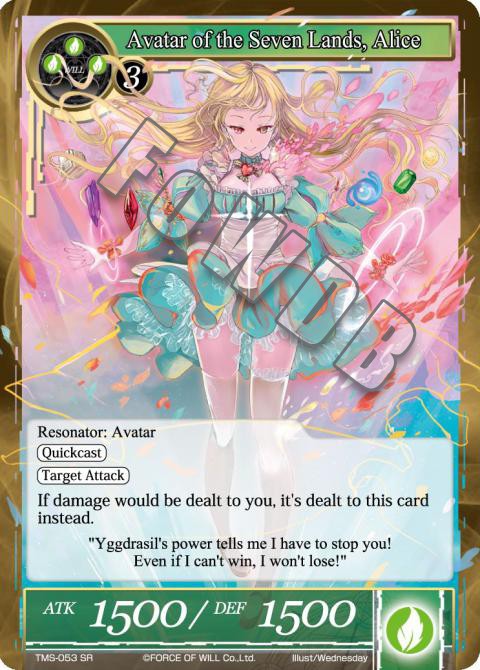 Wind
Text
Quickcast
Target Attack
If damage would be dealt to you, it's dealt to this card instead.
Flavor Text
"Yggdrasil's power tells me I have to stop you! Even if I can't win, I won't lose!"
Code
TMS-053SR
Rarity
SR - Super Rare
Artist Name
Wednesday
Set
TMS - The Moonlit Savior
Format
Wanderer, Origin, Alice Cluster
Next (TMS-054C)

Pierce damage is dealt to "Avatar of the Seven Lands, Alice" at the same time as normal damage, effectively negating Pierce.

If multiple copies of "Avatar of the Seven Lands, Alice" are controlled by a player, their controller chooses which replacement effect happens.

If "Avatar of the Seven Lands, Alice" is dealt damage via its prevention effect, and an ability or effect triggers upon that J/resonator damaging a resonator (Ex.: "Beastly Attack"), then that ability triggers.

Note that this can be used to infinitely chain "Beastly Attack" or "Behemoth, the Earth Eater" triggers until all copies of Alice are either removed from the field or lose their abilities.