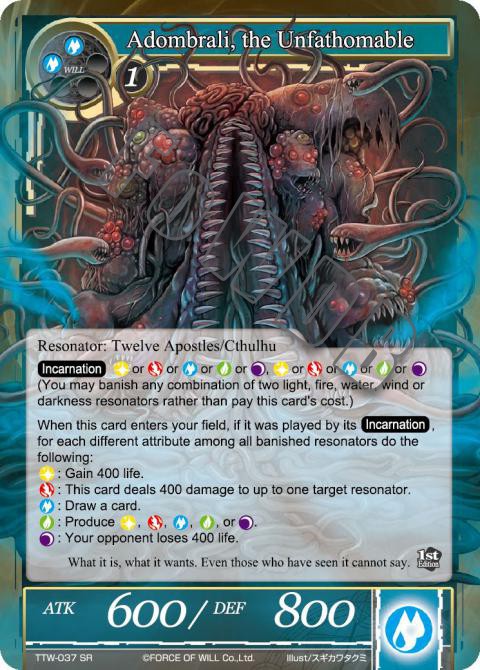 (You may banish any combination of two light, fire, water, wind or darkness resonators rather than pay this card's cost.)When this card enters your field, if it was played by its Incarnation, for each different attribute among all banished resonators do the following:

: This card deals 400 damage to up to one target resonator.

: Your opponent loses 400 life.
Flavor Text
What it is, what it wants. Even those who have seen it cannot say.
Code
TTW-037SR
Rarity
SR - Super Rare
Set
TTW - The Twilight Wanderer
Format
Wanderer, Origin, Alice Cluster
Next (TTW-038C)

Only two resonators may be banished for this card's Incarnation cost. Each distinct effect from the automatic ability can only happen once at most, regardless of the amount of times each attribute appears among banished resonators.

(Ex.: If you banish "Giovanni, the Lonely Child" and "March Hare," you only draw one card and produce one will of any attribute, even though you banished two water resonators.)

When resolving Adombrali's automatic ability, use Last Known Information to determine the attributes of the banished resonators.

(Ex.: If you banish two copies of "Possessor Princess of Love, Valentina", you will draw a card, not produce one will of any attribute.)
(Ex.: If you banish a "Pricia, Beast Queen in Hiding" that has all attributes, apply all five parts of Adombrali's ability.)